Taking it forward from Chapter-4..

We had 45-minute yoga sessions everyday from days 2-7 on the terrace of our Gompa. The yoga was for the express purpose of helping with the soreness caused by sitting through day-long teachings and meditations. Our yoga teacher was one of us who had got yoga teaching as her karma yoga job.

On the first day, we had been instructed by the German nun to dress modest so as not to offend the Indian staff. We Indians in the group already knew how to be modest. The instruction was more for the westerners. In her humorous style she had explained, “There you are sunbathing in your bikinis and shorts and our Indian staff sees that and wonders what we are doing here. Once one of the monks had to go through semi-naked bodies to reach his hut. He didn’t notice but you can imagine it is not exactly proper. So let’s sunbathe with our clothes on please.” Also, it was chilly at that altitude in April, so that too helped in being modest.

All that modesty was thrown out of the window for yoga sessions. The first day when I reached the terrace, I looked around and thought, “Is modesty off on the terrace? No one told me about that rule”. The girls had stripped down to their sports bras. The men were flaunting their ganji tops. Did the Indian staff not care about what happened on the terrace? Was the saying at Tushita, “What happens on the terrace stays on the terrace”? I could see that no monks and nuns were going to come sauntering onto the terrace. It was  going to be just us. And the monkeys.

The yoga spot – the terrace 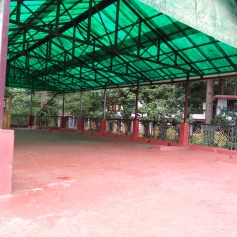 The covered portion of the terrace for sun-sensitive people 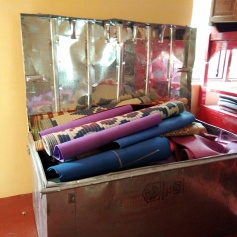 Yoga mats at the entrance of the terrace

Let me say that no one seemed to need any yoga “lessons”. Most of my fellow retreatants knew it. And I don’t mean the garden variety yoga I see around Ludhiana. I mean the really cool stuff. Everyday I would see someone or the other standing on one hand or on  the head, or spreading on the floor with arms and legs entangled in such a way that it would take me a minute to figure out which limb was connected where.

One woman used to contort her body in unearthly ways while standing on one leg, I mean even more than all the other yoga freaks there. I mentioned her in the group discussion and turns out, others had noticed her too. Varsha had walked right up to  her and asked her what she was doing. She had answered Tai- chi or some similar sounding Eastern workout. The diversity of fitness routines was there for everyone to see.

Since the yoga instructor had to accommodate everyone, she guided us through asanas that everyone could do and which could best help with the continuous sitting.  People who knew did their own thing that was up to their level. That was how I got to see the amazing things people could do with their bodies. I used to half concentrate on what was being instructed  and half  look at the fancy things other people were doing.

All the tall, white women seemed to be able to do splits. Katya  could  casually do wider than 180-degree splits like no big deal. She looked absolutely majestic doing them. Splits became her. I asked her about it in the group discussion and she talked about it like it was the most ordinary thing in the world. Did all Russian women have an inbuilt splits-level of flexibility? We had talked a little about our backgrounds in the group and when Katya had talked, “Raised in Siberia -went to Florida for college-started a company in Silicon Valley- lived in Bali-soon moving to Europe for Masters” – there was no mention at all of her interest in fitness or yoga. It was just an integral part of her tall, lithe frame.

The word “Amazonian” came to my mind on seeing these strong, extremely fit women. Any random selection of them could have played the women of Themyscira in Wonder Woman. I used to wonder, “What is it?”, ”What do you guys eat?”, “What do your mothers eat while pregnant with you? How are you all such Greek goddesses??”.

Also, there was no age bar in foreigners when it came to how well they could do yoga.  The instructor was sixty and fit as a fiddle. She used to do close grip push ups as part of her yoga routine. That had me flabbergasted. I was working on those for so long and I still had a long way to go and this woman could just do them in such smooth fluid movements. “How to be 60” goals right there!

The Indians had a tough time with yoga – most of us atleast. I could see one of the pudgy ones looking longingly at all the flexible people doing their thing. Varsha straight up opted out of yoga on seeing the magickry on the terrace and took the option of doing walking meditation instead. (People who found yoga difficult were given the option to do walking meditation). The rest of us were not exactly covering ourselves up in glory. We were doing ok. None of us looked like ambassadors of yoga from the land of its origin. The West (and the far East) had adopted it and made it their own. I used to be really proud of my flexibility levels in Ludhiana, but here, I was getting schooled by the absolute pros.

To be fair, these people were probably some of the better representatives of their countries – since most of them were on months-long trips. That level of daring comes only if one has a certain level of fitness.

As I mentioned in a previous blog, all the retreat participants got allotted karma yoga jobs. Mine was dishwashing after breakfast. We were a five-people team with my fellow members being Victoria – a lawyer from Russia, Lio – a green-eyed law student from Israel, Arzoo – a coffee taster from Turkey (yup, that’s an actual profession!) and X- a tall handsome white guy from somewhere (I have completely forgotten his name – I blame the silence). 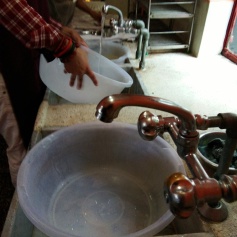 The beginning of dishwashing – getting everything ready 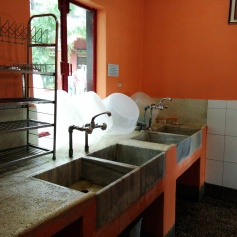 After the dishwashing. All the utensils have been placed on a table in the mess for the next meal 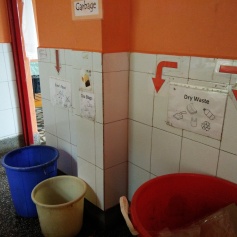 Waste segregation at source. Tushita was very conscientiousness about recycling and composting

We were given proper gear for the job – gloves and aprons. There were four sinks for the different stages of cleaning and the drying of dishes at the end. Victoria was on sink 1 doing the pre-cleaning of the dishes – removing the leftover food and soaking the dishes in water. I believe hers was the most icky job of us all because she had to deal with the leftovers, that too of 100+ people. I was on sink number 2 doing the soaping of the dishes. Lio was on sink numbers 3 and 4. Sink number 3 had the disinfectant and sink number 4 had the clean water for the final washing of the dishes. Arzoo and Mr. X towelled off the dishes. We became more efficient as time went on, doing the dishes faster each day.  A beautiful understanding had developed in the team. We understood a glance, a gesture. It made me think that we could all live in far lesser cacophony if only we tried.

I used to be conscious about  matching speeds with Victoria and Lio. It was a funny mental game to do the dishes properly while at the same time doing them at a rate such that I wasn’t the slow one. This kept my concentration on the dishes. Karma yoga is a meditation if you pay full attention to the karma you are doing. Always trying not to be the slow one was how the purpose of karma yoga was realised for me!

On the last day, during the picnic lunch, we were allowed to talk  and we-the dishwashers all sought out each other. We introduced ourselves properly for the first time, at the end of the course! And already there was so much love and affection.

It was a revelation. It was as much a learning experience as anything else in the retreat. The Buddhists have this concept of Shambhala – a mythical kingdom populated by enlightened beings. In silently washing dishes with such a diverse group of people in complete harmony, I felt I could see a glimpse of what such a society would look like.

My mom’s take, “Bhande maanjan gayi si othe. Ethe maanj leya kar. Aa hi sikhna c, aa taan ghare sikh lendi”. (If you had to wash dishes, there were plenty to wash at home. You didn’t have to go all the way up in the mountains to learn that!)

TO BE CONTD… Chapter-6

Work as an SBI YFI fellow