Stepping out of my bubble Part-3: The illusion of being the equal sex

Growing up, I had everything my brother had, that too before him as I was the elder one – the same access to education, the same access to extra-curricular activities, the same opportunities to voice my opinion.  I never felt any discrimination being a girl child in the family. I, of course, noticed the differing roles played by men and women in my family as well as everywhere around me – the men being the providers and women shouldering the responsibility of running the households. But I knew I belonged to a different generation and those gender rules wouldn’t apply to me.

I went to an engineering college following the herd mentality at that time and went on to do post-graduation, following the herd mentality at that time.  But as I was doing these things, I felt equal. I was getting an education the same as every boy in my generation. We were all a part of the same herd – there were no separate herds for girls and boys.

As I joined my first job, I felt fulfilled. I was finally going to be an independent working woman. I was as equal as the next guy.

Two years later, when I went for the fellowship, I was an oddity in Shahpur- a lone woman, there to do a solo project. I was breaking new ground. I was more than equal.

Then in the middle of the fellowship, I took a week-long break and went to Thailand.

I felt like I was carrying a heavy burden all my adult life of always being alert about my safety and in Thailand..whoosh..it was lifted. I could wear  anything and no one noticed. I did not have to worry if a bra strap was visible or if I was showing too much skin or if it was too late or too crowded. 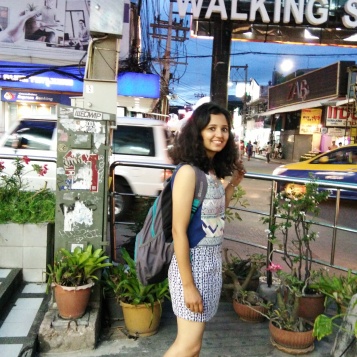 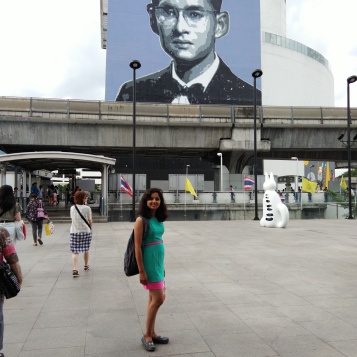 At night, I saw women swinging on poles in bikinis just next to the road in Pattaya and everybody just going about their night like it was no big deal. Infact, I was the only one staring in wonderment. What was this country?

A women was driving a public bus we boarded. It was a pleasant shock considering women drivers in public transport in India was something I had never seen in my life. Another woman took us from Pattaya to the capital Bangkok late at night in a taxi. I talked to the woman all the way about her life and requested her for a picture at the end. The first woman taxi driver to chauffeur me was worth memorializing.

A grainy pic of her ID card

The pic taken at the end of the journey

On coming back, my worldview had expanded irrevocably. The delusion of being the equal sex was shattered. It made me angry.

In Thailand, I had experienced for myself what being an equal sex actually meant – to be given the same opportunities and sense of security to thrive by the society as it gives to men, to not have to make life choices keeping my safety in mind, to have the same claim to public spaces and public transport at all times of day and night.

I looked back at my life with new eyes and realized that being unsafe as a woman who needed to be confined for her own good had seeped in as soon as I entered adulthood. At college, the girls had an in-time in the hostel whereas the boys didn’t. They could stay out the whole night doing whatever and nobody raised an eyebrow. We had an informally enforced dress code where even wearing capris was frowned upon. Our hostel was not only surrounded by a sturdy wall fence , we also did not have balconies attached to our rooms. There was no such wall surrounding the boys’ hostels and all their rooms had attached balconies.

College was supposed to be about freedom, but clearly only for men.

In post-grad university, the in-time was later, though not by much, and was enforced strictly.  So college taught me that I was to be barricaded for my safety.

But all the barricading cannot safeguard one from a society that is just not equal for women.

A couple of incidents that had become faded scars were refreshed by my Thailand visit. I remembered getting touched inappropriately on atleast two occasions in my childhood – once while travelling in a crowded bus in Delhi in  pre-metro days and another time on a crowded street in Calcutta when I was about twelve. I was with my aunts on the first occasion and with my parents  on the second. I remember not understanding what exactly about the touch of an unknown hand in a crowd had made me uncomfortable, but even as a child I knew it was not right.

Being in Thailand and feeling completely free of the fear of unknown hands in a crowd had reminded me of how unsafe public spaces in India were to me even as a child and now as an adult when I was always on my guard. When I travel in buses , I routinely deal with manspreading and rogue elbows and hands. When I travel in a metro, I make sure to use the reserved compartment. For that matter, any public transportation that has separate seating for women is always preferable. Any to-and-fro travel I do alone in public transport – safety is front and centre of my mind. I am on alert; I try not to sleep and am always aware of people around me. What I wear , how I carry myself in public is all a function of safety. *

My dad had given me pocket knives to carry on my person at all times while travelling during my fellowship. I had one in each piece of baggage. I used to travel a lot by trains and buses in those days.  He had asked me to practise using a knife so that in case I was accosted , I could wield it properly. (Somehow, pepper sprays were hard to come by. I couldn’t even find one in Pune.)

In Ludhiana, I usually have my own vehicle and travel in my comfort circles , so I haven’t felt unsafe here.  The villages where I worked were an exception too. (Women there accessed the public spaces freely and men were used to sharing the public space with them, that probably had something to do with it.) As I moved from the villages to a city (nearby Itarsi and Betul and beyond), I felt progressively unsafer. It became clear to me that formal education (or the lack of it) was not to be blamed for the decency (or the lack of it) in men.

Besides these exceptions, to our country’s (dis)credit, I have felt unsafe across the length and breadth of it – Bombay, Delhi, Bangalore, Pune, Chandigarh, Betul.. Anytime a train would get delayed late into the night or I had to take an auto alone on a deserted stretch, anxiety would start building up in me and my senses would go on high alert.

We as women are forced to restrict ourselves in every aspect of our lives because of “safety issues”. When it comes to choosing a college, so many parents are hesitant to send their girls out of town because of the dread of the big bad world.** I went out of town, but so many of my female cousins weren’t allowed to.  The same scenario plays out when it comes to jobs.

I am cognizant of the fact that I am talking about these things from a privileged position. When I was working in the village, one of the frequent questions I would get from worried mothers was , “My daughter wants to move out of the village to study/take a job. Is it safe? How did your parents agree to send you alone here?” The girls in the village had the same aspirations as girls anywhere in India – after all they had the same exposure to the world. Many houses had TVs and girls there too saw the progress that the wider world had made. I didn’t have any convincing assurances to give to these mothers of the world being a rosy place. But I still  encouraged them to let the girls fulfill their aspirations and told them about all the safeguards I use while being out and about.

Whenever a horrific event like the Delhi gang rape happens, solutions such as putting up CCTVs and patrolling by police are put forward***. They are legitimate but ultimately superficial interventions. In Thailand, these were not the reasons of why I felt safe. I felt safe because the behavior of men made me feel that way. The gaze was different. I did not feel like an interloper while in public spaces unlike in India. ****

The real question is why can’t the men of our so called “sanskari” country behave? Why is the burden of maintaining this sanskari veneer only on women while “boys get to be boys”?

Its high time we drop the veneer of being sanskari and actually introspect about how boys are raised in this country and what fuels their misogyny and entitlement.

** Safety before choice of college

How not to talk about “women’s safety” in public spaces

Work as an SBI YFI fellow